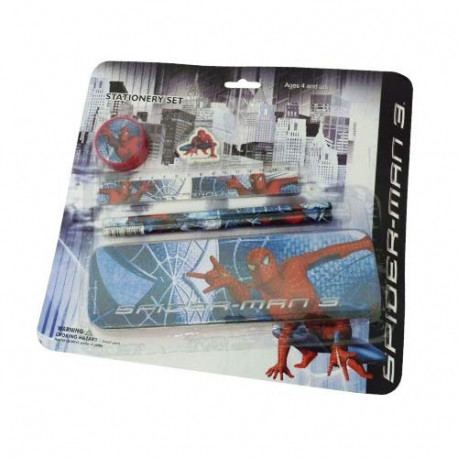 If your child struggles with individual accessories because they tend to quickly misplace them, you may want to think about giving them a school set. This assortment of stationery contains different school accessories such as pencils, pens, erasers, etc. In addition, it presents a storage tool in which it can place each accessory after use. For fans of the superhero Spiderman, here is a set of stationery in the colors of the third part of the film.

The Spiderman stationery set that is presented to you in this article is an accessory that plunges you back into the world of this superhero. Indeed on the face of this set, we find many images with his effigy. In the same way, the spider man is also present on all the accessories that are found in this set.

The Spiderman 3 stationery set contains 6 elements: a ruler, 2 wooden pencils, an eraser, a pencil size and a metal pencil box. It is a light set that your child will be able to take everywhere with him without difficulty.

Spiderman 3, the latest installment in the Spider-Man Trilogy

Spiderman is a film that tells the story of a young man, Peter Parker who was bitten by a radioactive spider. Since then, he has developed extraordinary powers that have transformed him and that allow him to achieve a lot of things like developing his sixth sense in order to be warned of dangers. It can also climb walls, throw spider wires, etc.

Young Peter Parker puts his powers at the service of his city and protects it from delinquents and villains.

After Spiderman 1 and 2, the last part was born in 2007 and put an end to this trilogy. In this last opus, Peter Parker will have to fight against an enemy a little different until then. Indeed, the first years of his life as Spiderman completely changed his life on all levels.

After this turbulence, he regains some balance and plans to marry his girlfriend Mary Jane. One evening while they were in the park, a tiny meteorite falls near them and bursts, letting out a viscous material called the symbiote. She clings to Peter's moped.

One evening while the latter sleeps, the symbiote clings to his costume and changes his color. Peter realizes this the next day, but does not seek an explanation for it. After wearing his suit, he realizes that even his powers have increased which makes him very happy. But this new black suit also has a negative impact on him because it makes him more violent, rabid and selfish. In fact, it is its entire dark side that rises to the surface.

His change in behavior will take him away from his relatives like Mary Jane and her best friend Harry. Not without difficulty, he manages to get rid of the symbiote after struggling with it. But the latter has acquired some of his powers during this time and will cling to another person, creating an evil double called Venom. Spiderman will succeed in defeating him and righting the wrongs he has done to some people especially with Mary Jane.