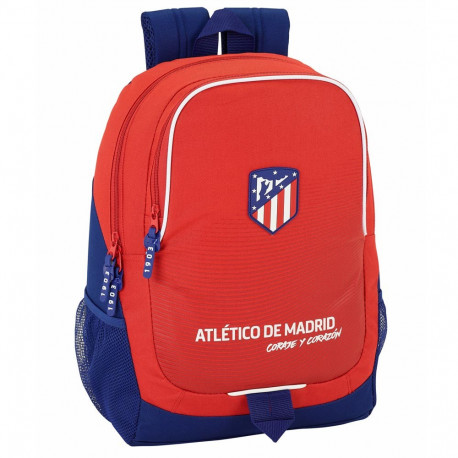 Suitable for children from 6 years old

Atlético de Madrid is one of the biggest football clubs in Spain. It has many supporters around the world. Just like other world-renowned clubs, Atlético de Madrid is a brand that manufactures a lot of products and derivatives in its image. If you have a child who is a fan of football and especially of Atlético, a backpack in the colors of this team will most likely please him.

Atletico Madrid, 2Th largest club in the city of Madrid

Originally a subsidiary of Athletic Club de Bilbao, the Madrid club was registered in the register of associations in 1907 and thus obtained its own legal personality. At that time, the team was known as Athletic Club de Madrid. The rivalry with the other big club of Madrid will only come gradually as the team is developed.

Indeed, being in its early days a branch of the Bilbao club, Athletic de Madrid played with players from this team and vice versa. It was in 1912, when Athletic Bilbao released its charter that these movements ceased because it now only allowed players from Biscay to play in the national championship.

But it was at the beginning of the 1920s that the differentiation between these clubs was clear and definitive with the new statutes of the Madrid club. The name of the team will evolve a lot over the years following different crisis situations that the team has had to go through.

Even if Atlético Madrid are still behind Real Madrid in terms of record, this has not prevented them from winning many titles at the national and continental level. Atlético have won 10 Cups and 10 Spanish championships. She finished many times between the 2E and 3rd place in the championship. Three-time unfortunate finalists of the Champions League, the club has still won 3 Europa Leagues and 3 UEFA Super Cups.

The Spanish Supercup, the Intercontinental Cup and the European Cup Winners ' Cup are also part of its squad.

The Atlético de Madrid backpack measures 44 cm high, 32 cm wide and 16 cm deep and perfectly suitable for children from 6 years old. It has a large central compartment to receive all your child's belongings.

It also has a pocket in the front to increase the storage space available for your boy. Besides that, two side pockets in net are also present on this binder and add additional space to hold objects.

The bag is in the colors of the club Of Atlético Madrid with a strong dominance of red and blue. To ensure the child a certain comfort in his transport, the atlético de Madrid backpack is equipped with two adjustable shoulder straps. This model is fleece and shaped so that the child is comfortable when carrying his bag. The schoolbag has a structure that allows it to withstand the various shocks of everyday life.