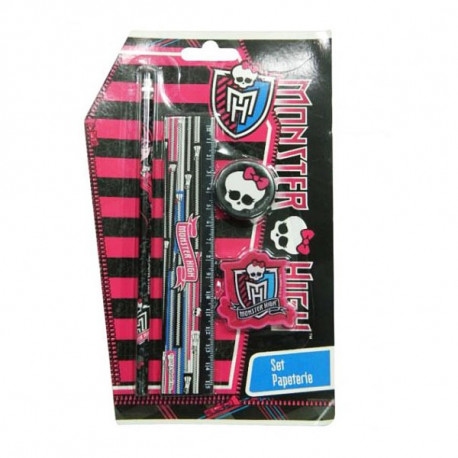 A school set is an accessory that allows to contain different tools used in the educational setting such as pencils, pens, etc. For kids who are fans of Monster High, here is a set of stationery in the colors of the animated series.

Created and launched by Mattel in 2010, Monster High is a model doll franchise that brings together characters inspired by mythology, fantasy literature, cult films, etc.

Monster High dolls have skin of all colors and this has contributed to their success on a global level. The story of Monster High revolves around the lives of the student population at Monster High School. In this high school, we find the teenage descendants of the most famous monsters in the world.

The latter find themselves braved the trials of a high school with mixed creatures, in a world barely ready for this kind of thing. The students of this high school do not like to turn their thumbs: either they try to solve at all costs the problems in which they are, or they make their way through a new adventure. On the way to these different situations, they will make enemies and new friends.

When Monster High was released in 2010, it sparked controversy related to the skin color of the various characters. But these criticisms of these accessories have on the contrary created desire in children and collectors. This has allowed the franchise to sell more than 150 million dolls around the world.

Here again, the success experienced by the dolls is immediate and sales are made almost instantaneously. But Mattel decided to go back to its origins and promised for the coming years the return of Monster High with many novelties like new dolls and a new animated series. So we're not done with the Monster High universe.

The features of the Monster High stationery set

The Monster High school set is a set consisting of four stationery items namely: a ruler, a wooden pencil, an eraser and a pencil sharpener. This stationery set displays the color: a black and pink color that does not fail to please young girls!

On each of the accessories that make up the set, we find an image or an inscription reminiscent of monster high school. This very nice accessory is mainly intended for girls.