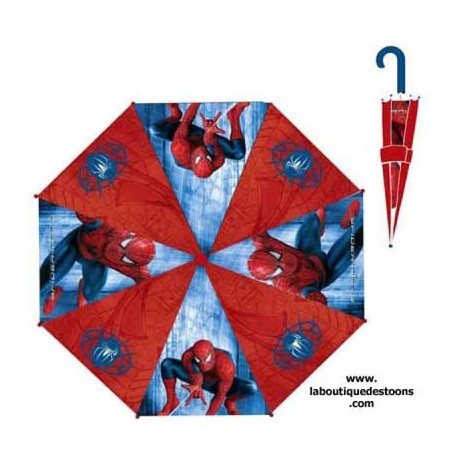 Whether it's against the rain or the sun, the umbrella proves to be an ally when it comes to protecting us. Children love to use this accessory especially when it is very aesthetic. It is this combination of the useful and the pleasant that the Spider-man umbrella to your children.

Spider-man or Spider Man is a mythical character of Marvel heroes. First appeared in August 1962 in one of the comics produced by the franchise, Spiderman has crossed eras and generations and continues to make a name for itself among children and superhero fans.

The story of this young man who has become one of the greatest heroes of his city leaves no one insensitive especially not our little bits. Indeed, he is an ordinary young boy who went to school like everyone else and who during a school trip was bitten by a radioactive spider.

Following this bite, the latter begins to transform several days later into a being endowed with supernatural powers. But instead of using these gifts to do what he wanted, he decided to put them at the service of others and help them.

Not wanting to draw attention to him so that everyone would know that he was the protector of the city, he thought of hiding. So it was in his quest for the perfect disguise and corresponding to his extraordinary abilities that he thought of this very distinctive red and blue outfit.

This is complemented by a black spider placed on its chest in the middle of a white spider web. Spider-man is now one of the most famous heroes in the Marvel universe and kids love to play his character.

Offering a spiderman umbrella at your little end will certainly delight him. In addition, the design of the umbrella is composed of several images of spider-man in action that are alternated with images of its symbol the spider.

No more umbrellas that require a movement on your part to open. the spider-man umbrella is an automatic model designed to facilitate its use especially among the smallest. To do this, the manufacturers have equipped this umbrella with a button placed on the top of the handle.

With it, you don't have to pull the umbrella before it unfolds. Just press the button for the umbrella to automatic spider-man reveals itself and protects you. This feature greatly facilitates its use for the little ones because they do not necessarily have the skills to open their umbrella alone.

Moreover, compared to older children, the child will feel like they have a superpower like spider-man allowing them to open their umbrella without any effort. In terms of dimensions, the red spider-man umbrella has a length of 48 cm, making it a good size tool capable of protecting the user.