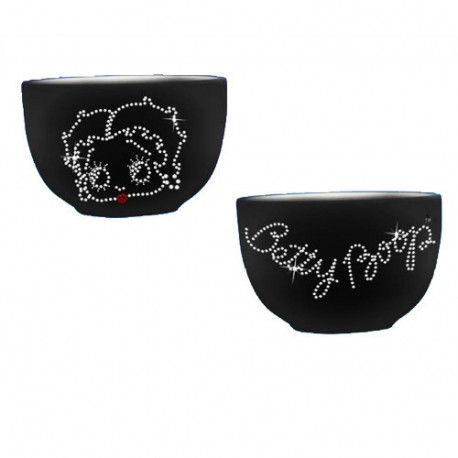 Dimensions: 13 cm in diameter and 8 cm in height.

one bowl is a dishware accessory that helps us eat our food in peace. But like all kitchen products, we like this type of room to be aesthetic. This is the case with the Betty Boop rhinestone black bowl that will not leave you indifferent from this point of view.

Betty Boop as decorating your bowl

Betty Boop is a cartoon character who appeared on screens in 1930. A pretty woman, she is the first woman to have an active role on screen and since then she has become an emblematic figure of the animated series.

A charismatic figure, Betty Boop is now considered one of the first feminists to defend the status of women in a society of men.

To show the cause she championed, Betty Boop appeared with a completely offbeat look of that of the women of the time. Indeed, she was always dressed in short and sexy dresses. She was also wearing make-up and proudly wore a beautiful lipstick.

With her large lashes covered in prominent mascara on screen, Betty Boop claimed to be a woman capable of dressing as she saw fit.

She was also a woman of character, because in many episodes of the series, she stood up to the men who made advances to her and she did not hesitate to push them away. The aim was to make it clear that his clothes were by no means a call to the foot.

Hard worker, Betty Boop has held different occupations and thus proved that a woman can be independent.

the rhinestone Yes Rhine Stone is a very special type of glass. Indeed, it has the distinction of imitating gems, those precious stones that are used to decorate different jewels. This new kind of crystal has now become a fashion accessory that perfectly replaces gemstones.

The rhinestone is used on all kinds of products: clothing, decorative objects, hair ornaments, etc. It also has a large index of refraction that allows it to have a certain shine. The appellation Strass comes from the name of the first jeweler to have used it in these creations: Georges Frédéric Strass.

the Betty Boop black rhinestone bowl was made of ceramics. This material is known to have no smell or taste, it is healthy and very hygienic. Its presence makes this bowl a perfect model for food use, as you can put your food there without fear.