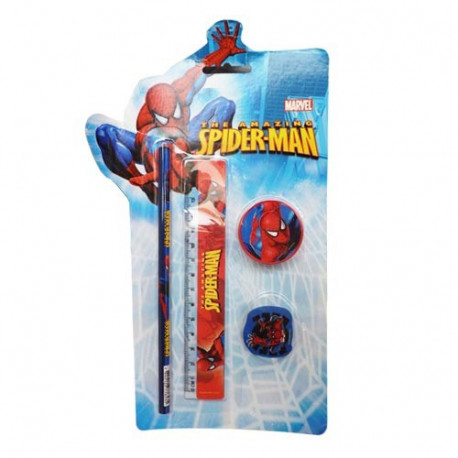 For children who are fans of drawings and coloring, a stationery set is a set of school tools like pencil, eraser, ruler, etc. For the little ones, having a stationery set in the image of one of their hero is very appreciable. Indeed, it will give them real pleasure and encourage them to use their tool more often. Here is the Spiderman stationery set for spider-man fans.

Spiderman, the world's best known and most beloved spider

Spiderman or spider-man was born in 1962 thanks to the imagination of screenwriter Stan Lee and cartoonist Steve Dikto. A superhero in the Marvel Universe, he made his first appearance in the United States in August 1962 in a comic book in the Book Amazing Fantasy franchise.

The story of the spider-man real name Peter Parker begins when he was in high school. This young boy, son of Richard and Mary Parker, was orphaned by both parents who worked undercover for the government.

He was entrusted to his aunt and uncle May and Benjamin Parker who were to raise him. An ordinary student at the base, he sees his life turned upside down during a school trip. During the outing, Peter is bitten by a particular spider. It is a radioactive spider that will inoculate a substance in the body.

His life changed shortly after this event, which was innocuous to him, as he began to develop extraordinary powers. This manifests itself in an extraordinary agility and a development of its sixth sense. He is able to feel imminent danger.

In addition to this, he realizes that he develops on his fingers special elements that allow him to adhere to the walls. He is also able to weave cobwebs and cling to them. The appearance of his powers does not scare him and he seems to have fun at first. He uses his abilities to make money and circumvent the law.

But an event will come to turn his life upside down and change the way he uses his powers. One evening when he has the opportunity to arrest a thief who runs away, he does not care and lets him flee under the pretext that it was not his problem. Later that night, he learns that his uncle is being killed by a thief. Mad with rage, he sets out in pursuit of the murderer and finds him. Following the latter's arrest, he realizes that it is the burglar whom he allowed to flee earlier in the evening.

Since then, he has decided to fight crime tooth and nail.

The Spiderman stationery set is a set that is composed of a ruler, an eraser, a pencil and a pencil sharpener. Your child has enough to draw with the different tools present in this accessory.

In blue color, the school set reveals an image of Spiderman throwing a spider wire. The inscription "The Amazing Spiderman" is written in yellow on the packaging, but also on the ruler and pencil. In addition, on each of the tools present in the set, we distinguish an image of Spiderman.