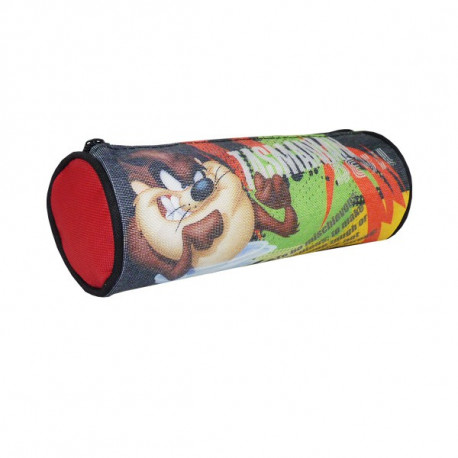 the Kits are items that allow you to store different types of accessories, especially when it comes to a student kit. In addition to being light, they are practical to use and depending on their size, they can contain a large amount of elements. one kit in the image of Taz Tazmanian will be useful and very distracting for your child or any other fan of the character.

Still called the Tasmanian Devil, Taz is one of the main characters of the famous cartoons "Looney Tunes". This is an animated series from Warner Bros. Studios. Appeared for the first time on screen in the 1954s, Taz is one of the heroes of the animated film with Michael Jordan " "Space Jam".

In this film, he and his friends try to save the earth from enslavement by playing a basketball game against aliens who have come into their world.  They are empowered to steal the talent of several experienced basketball players for the game against the Tunes.

Faced with this threat, Taz and his companions call on Michael Jordan to lend a hand. So they will convince him, very reluctant at first, to train them in the rules of basketball. After hard work, they will be able to defeat their enemies and send them back where they came from.

In addition, Taz also has its own animated series released in 1990 Taz-Mania which is essentially centered on him and his story. He is a popular figure who even got his image painted on the nose of one of the American warplanes during World War II.

But we do not forget that Taz is above all the enemy of grosminet and titi. He is a brawler and tries to inquire about people he doesn't like. He doesn't talk much and rather makes grunts.

On the other hand, when he wants to move, he becomes a real tornado and devours everything in his path. This is what earned him the name "Taz top".

An essential school accessory for girls and boys

Contrary to what one might think, Taz Tasmanian Devil kit was designed specifically for children, girls and boys. Indeed, it is an accessory that has been made with superb finishes. The seam is well made and quite thin, which makes it possible to bring out the shape of this object.

The colors used are diverse, pretty and soft. Thus, we find among the colors of orange, light green and red. Taz is drawn on the kit with a mischievous smile in the corner.

the Taz Tazmanian Devil Kit is an accessory that measures 21 cm in length and 8 cm in diameter. It is a model of relatively appreciable size that can easily hold all the small stationery equipment that can be used by a student.

Round in shape, it is a kit with a single compartment with a zipper to facilitate its opening.