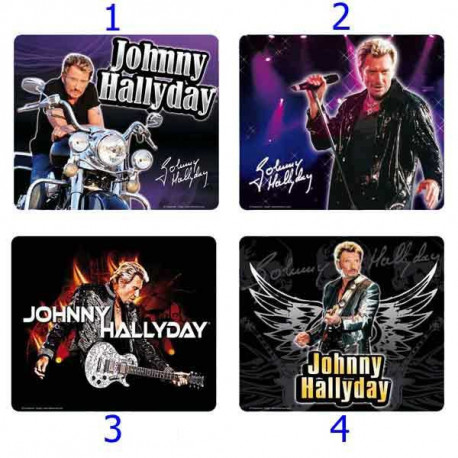 4 models to choose from

More than an artist, Johnny Hallyday was the icon of rock'n'roll in France. This genius artist has captivated generations of people with his wild music. He has many fans all over the world, and especially in France, his country of origin. The Johnny mouse pad will be a wonderful gift to give to a loved one or to yourself if you are a fan of the artist.

Who is Johnny Hallyday?

His real name Jean-Philippe Smet, son unic of Léon Smet and Huguette Clerc, Johnny is born 15 June 1943 in 9E Arrondissement of Paris. He grew up with his paternal aunt, far from his parents who separated when he was still very young. The latter has two daughters who are dancers and Johnny finds himself making many trips around Europe with his cousins.

His cousin Desta married an American dancer named Lee Hallyday. The latter becomes a real father figure for the young boy. It is even he who nicknames him Johnny. Years later, Johnny was also interested in the artistic world and went to take theatre classes. He will also practice guitar and violin.

He took to the stage in 1956 at the age of just 13 to open the show of his cousin Desta and her husband Lee. It was at the age of 14, back in Paris, that he discovered Elvis Presley and the musical current carried by him: rock'n'roll that would turn his life upside down. He is interested in this music and pushing by his relatives, especially Lee, Johnny will begin his apprenticeship.

He released his first song in 1960. Love you madly and in 1963, the single The idol of young people becomes a tube. And that's how Johnny started to get talked about in the music industry.

In the early 1970s, he decided to diversify his music. This will lead him to a collaboration with Philippe Labro who will make discover a more intimate Johnny to the public.

Johnny has made several detours to the cinema with several films such as revenge, Each his life, L'Aventure c'est l'aventure, l'homme du trainetc. He also performed for the first time in his life in the theater in 2011 in a play by Tennessee Williams. The name of the room is Paradise on Earth and he plays it alongside Audrey Dana.

In 2017, he revealed that he was undergoing treatment because of cancer cells. After many therapies, he succumbed to lung cancer on December 5, 2017.

The Johnny Hallyday mouse pad is available in four models. Each model is decorated with an image of the star. All the images used are unique and show Johnny in a different posture.

In addition, the artist's name is written on each of the models with backgrounds that seem to revive Johnny. The Johnny Hallyday square mouse pad measures 22 cm and allows you to have quite a bit of space for using your mouse.