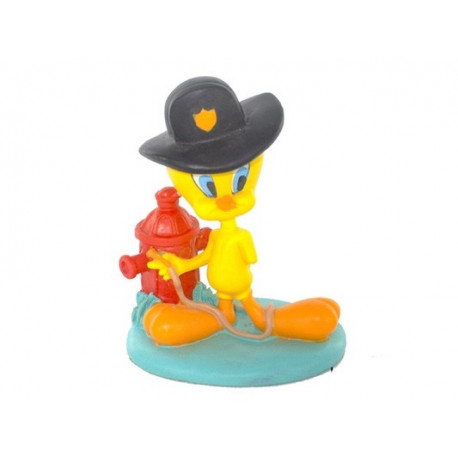 Kids love to have collections of their favorite character and cartoon animated series offer a multitude of choices. American cartoons have been around for decades and have interested generations of children. The characters of these animated series are generally known and appreciated by the public as Titi, the little yellow canary.

From his real name Tweety Bird, Titi is a very distinctive little yellow canary that appeared in cartoons in 1942. It is a character that is singularly distinguished by several features starting with the color of its plumage which is a very remarkable bright yellow.

However, it has a tiny body and large orange feet. Moreover, he has an important zealousness and therefore the sentences he pronounces naturally make you laugh. Titi has a few strands of feathers on her head, long eyelashes and large eyes of sky blue color.

Titi has a small, acute voice that people have long mistaken for the voice of a female. However, Titi is indeed a male canary. This point is important because the authors of the French versions were mistaken and for a long time considered her a female.

Living in a nest or a golden cage in The House of Meme, he has a favorite activity which consists in turning into a bourrique Sylvestre the cat still known in the series under the name of grosminet. He was also the enemy of Sylvester's sons Babbit and Castello.

Even if he may seem defenseless and fragile, Titi is a very clever character who knows how to play with his enemies like Sylvestre. He knows how to feel sorry for himself and spends his time pretending to be a victim to people around him like Hector, the bulldog in Meme. And yet, he does not need their help to overcome the bigminet.

Titi has a very long filmography to his credit and he appears in one of the most famous animated films "Space Jam" as a member of the Looney Tunes. Titi is a character whose replicas are cult such as: « Z'ai thought I saw a rominet " and "But yes but yes z'ai bien vu un rominet ».

The Titi firefighter figurine is made of hand-painted resin. By opting for this manufacturing material, the designers have chosen to provide you with a more robust accessory that will allow you to keep the figurine over time.

The Titi firefighter figurine is made according to the characteristics of the small yellow canary. Thus, your figurine is the same color as its plumage. In addition to his body, we see the big blue eyes of Titi who has his gaze fixed on what he does. He wears a black hat decorated with an orange insignia.

On the figurine, it is seen next to a fire hydrant. He holds in his hand a pipe connection that he tries to link to the hydrant to imagine, sucking the water into the cistern of the firefighters' vehicle. From a height of about 7 cm, this Titi firefighter figurine can be the beginning of a future collection.