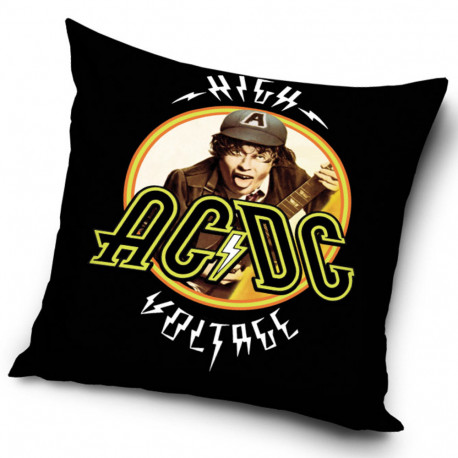 Four models to choose from: Voltage, Grey, Devil or Bell

Notify me when available
Previous Next

The hard rock band AC/DC is recognized as a pioneer in the development that will later experience this musical genre. AC/DC is an Australian-British band that has raised fans all over the world thanks to its music. Today, the band's recognition has reached such a level that derivatives are made to please fans of the band like this cushion cover.

The cushion cover of the fans of the group AC DC

The cushion cover that is presented to you in this article is a accessory to the official AC/DC license. Made in square form, the AC/DC cushion cover measures 45 cm. It allows you to enjoy enough space to cover your cushion. By opting for an AC/DC cushion cover, you give a new look to your pillow in addition to protecting it and maintaining it in good condition.

The AC/DC cushion cover is available under 4 models : gray, bell, devil and voltage. Each model has a different design. In addition, some of them refer to songs written by the band.

So, one of the AC/DC cushion covers bears the inscription Hells Bells. It is the first song from the album. Back in Black of the band, the second best-selling album in the world. The song, which was first composed with Brian Johnson, was released on July 25, 1980, five months after Bon Scott's death. The single Hells Bells, which starts with 13 bells and sounds the death knell, has risen to the 50thE position in the U.S. charts The Hells Bells cushion cover with its bells is reminiscent of the beginning of the song.

Another model bears the mention High Voltage which refers to the band's first album released internationally in 1976. It covers tracks from their previous two albums released only in Australia.

The Black Ice cushion cover from the AC/DC group is also one of the models offered to you for this accessory. Black Ice is the 14thE album released by the group AC/DC and it knows a real success in the world. Although the album was released in October 2008, this did not prevent it from being ranked #1 in nearly 29 countries worldwide. Black Ice was also the second best-selling album in the world during that year.

The album was recorded in Vancouver, Canada. The band began working on the album in 2006 but it took 2 years to see it on the market. 15 songs are available on this album.

AC/DC cushion covers are made of soft polyester. Polyester is a known material and has many advantages. By opting for a polyester cover, you make the choice of a wear and wash resistant accessory.

Besides that, polyester has the ability to keep its shine for a very long time. Thus, your AC / DC cushion cover is not likely to rub off after a few washes. Soft and filtering material, polyester will allow your cushion to keep you cool during your nights.